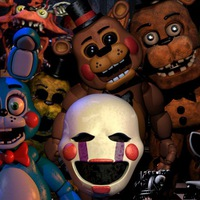 Five Nights at Freddy’s 2 continues the story of the famous survival horror franchise. Several years have passed since the events of the first game. The previous security guard of Freddy Fazbear's Pizza complained about his working conditions and got transferred to the day shift. Now it’s up to you to watch the place at night. The creepy animatronic animals got a software update, but it didn’t help the situation much: they still wander around the rooms after hours looking for living beings to entertain.

Starting a new FNAF 2 game feels very familiar: you get a call from one of your colleagues who explains your duties and talks you through the procedures. This time around, you don’t have to worry about the generator: there is only one unlocked door, and two vents on each side of the room. The animals can crawl in at any moment, so you need to watch the feed from numerous cameras installed in various corners of the restaurant.

All the games from the creators of Five Nights at Freddy’s 2 play similarly to old-school point-and-click adventures, but feel like interactive horror experiences. The controls are minimal: you can only look around, activate light switches, turn on the flashlight, check the cameras, and put on a mask to fool the animatronics into thinking you’re one of them. The latter strategy only works on some of them, while others will require you to come up with alternative ways of protecting yourself.

Thanks to the success of the original FNAF, the creators managed to keep FNAF 2 free from unnecessary pay-to-win mechanics and similar anti-consumer practices. In terms of mechanics, it is a very basic game, but it uses what it has in such ingenious ways, that you never even think about putting it down.

Although this installment is available on multiple platforms, playing Five Nights at Freddy’s 2 online is probably the best way to enjoy the game. The graphics are not rendered in real-time, so your browser won’t struggle with the processing even on older machines. There’s also no need to worry about downloading or installing anything – just click New Game and start playing. Can you survive five nights in a row without losing your mind? There’s only one way to find out.

FNAF 2 is one of the best FNAF Game you can play on Kevin Games.
This game works perfectly in modern browsers and requires no installation.
FNAF 2 has been played by thousands of gamers who rated it 3.9 / 5 with 15761 votes.

Did you enjoy this game? Then give other FNAF Games, Horror Games, Monster Games, Survival Games a try.