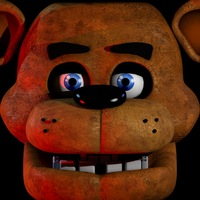 Five Nights at Freddy’s is an extremely popular horror video game. There’s something strange happening at the famous pizza place. Animatronic animals which entertain children during the day go into a completely different state at night. Their programming makes them watch out for intruders, and they become angry if they see someone, who is not supposed to be at the restaurant after hours. You are a new employee, and your job is to keep an eye on the place after dark. The problem is, the animatronics consider you a threat since your face is unfamiliar to them. Thankfully, you are stationed at the security booth, and you can look at camera feeds to check on the animals. How hard can it be, right?

Every new FNAF 1 game begins with a call: your supervisor is explaining the situation, and warning you about the danger you might or might not be in. His tone seems relaxed enough, but what he is saying is not particularly reassuring: apparently, the animals wander around the halls of the building at random, and they can walk into your booth at any moment. You don’t want to know what happens if they do.

Unique gameplay mechanics keep Five Nights at Freddy’s free from the usual clichés of the horror genre. You cannot leave your station, fight, or hide anywhere. However, there are several things you can do to make it through the night. Use the cameras to identify, which of the characters are missing from their usual spots. If one of them is getting close to your location, switch on the lights in the rooms to your left and right – otherwise, the feed will be pitch-black, and you won’t be able to see anything. Lock the electronic doors to ensure nothing can get it. Watch out for the generator level: the power drains slowly as it is, but when you activate a door or a light switch, the energy starts draining faster.

The visuals and sounds of FNAF 1 play a key role in creating the game’s chilling atmosphere. The premise is unnervingly dark and humorous at the same time. The whole concept is built around fear slowly creeping in, making you progressively more agitated. That’s the genius of FNAF series: most of the time, you are the main source of your own terror.

It’s possible to play FNAF 1 online, without installing it on your device. Launch the game in your browser window, make it full-screen, shut off the lights, and put on some headphones – you are guaranteed to have one of the spookiest experiences of your life.

FNAF 1 is one of the best FNAF Game you can play on Kevin Games.
This game works perfectly in modern browsers and requires no installation.
FNAF 1 has been played by thousands of gamers who rated it 3.8 / 5 with 27760 votes.

Did you enjoy this game? Then give other FNAF Games, Horror Games, Monster Games a try.