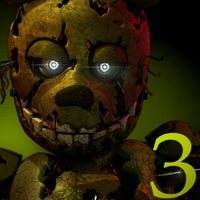 Five Nights at Freddy’s 3 is another chapter in the famous horror saga told through the eyes of a security guard working nights at a strange pizza restaurant. Just like the previous FNAF games, this one utilizes point-and-click mechanics in combination with simple, but effective visuals to create an unforgettable experience. Creepy animatronics are back with a new and updated program, but there are still some hiccups in the software. They roam the rooms of the restaurant after dark looking for living beings. What happens, when they find you? Pray you never find out.

The suspense, the loneliness, and the atmosphere of haunting terror will overwhelm you in every FNAF 2 game no matter how many times you play. Ultimately, you are defenseless against the strange animal robots: you can neither fight back nor run away. What you can do is prevent them from creeping up on you, and scaring you to death. Keep checking the camera feeds to know where the monsters are. Use the appropriate means of protection: the mask that prevents them from identifying you as a human, the flashlight, and the switches illuminating the vents. If you manage to keep the automatons away for five nights in a row, you have a chance of making it through in one piece.

Fans of Five Nights at Freddy’s 3 play the game time after time, trying to re-create the thrill of the first playthrough. Though it is not quite the same after several successful runs, you still never feel fully at ease. The atmosphere is simply too chilling. At the same time, the game’s dark humor releases tension from time to time, making the ride even more dynamic.

Just as its predecessors, this title is available on multiple platforms. Although the controls may differ, depending on the system, the essential mechanics, graphics, and audio are always the same. It’s probably best to enjoy FNAF 2 online without even downloading and installing it: there’s no need to occupy space on your device and wait when you can have the same experience in a browser window. Just don’t forget to make it full-screen for better immersion.

If you have never played this indie survival horror before, now is the perfect time to do so. Players can enjoy Five Nights at Freddy’s free of charge, so there is no reason not to try it out, and see what makes the franchise so popular. Have fun fighting off the most horrific robot animals you’ve ever seen!

FNAF 3 is one of the best FNAF Game you can play on Kevin Games.
This game works perfectly in modern browsers and requires no installation.
FNAF 3 has been played by thousands of gamers who rated it 3.9 / 5 with 8297 votes.

Did you enjoy this game? Then give other FNAF Games, Horror Games, Monster Games, Survival Games a try.